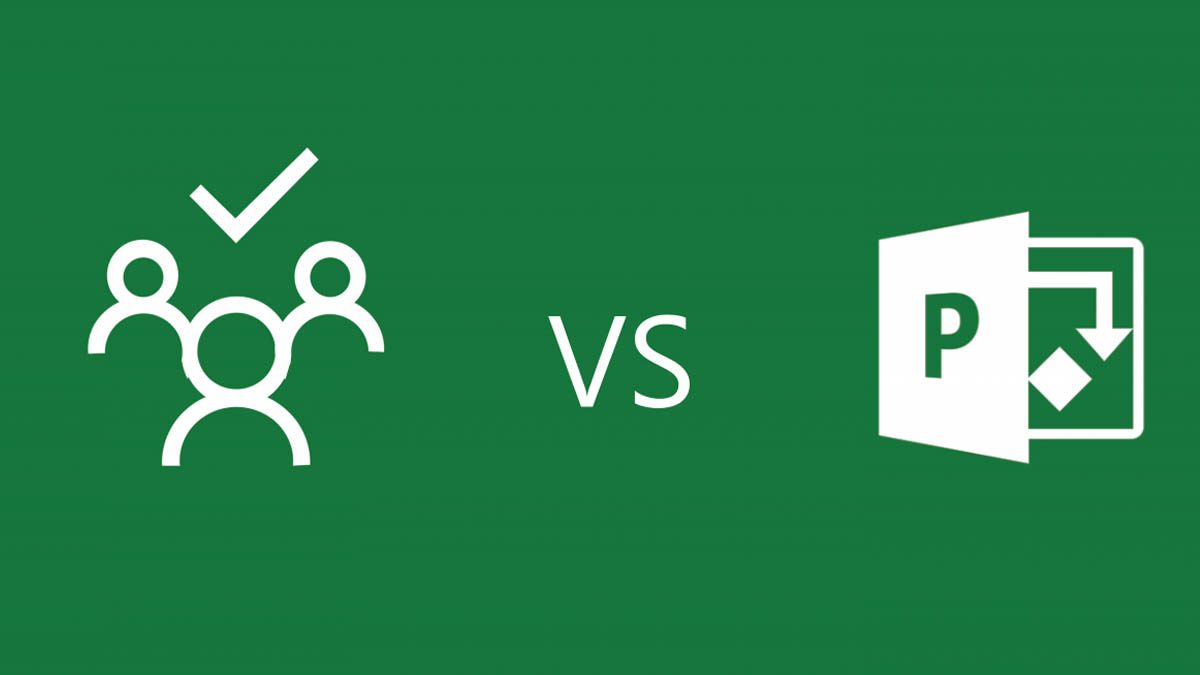 What is Microsoft Planner

Although smaller, independent project management competitors have gained in popularity, Microsoft’s ability to link Planner with other Office applications gives it a great opportunity to open the doors of enterprises. The team’s Microsoft group chat tool may have attracted more attention when it was launched last year because Planner aimed at helping teams coordinate projects, share files, and work more efficiently, mainly in the shade.

Each plan of the Planner has its card containing task cards that are distributed into groups. Each card contains information such as a description and due date. Files can be attached, and team members can leave comments on the card. Team leaders can then assign the task to individuals or to several team members who will be notified by email. Groups are used to represent the status of a project. This may mean that the task is being dragged from the “To Do” slave to “Completed” when the work is completed. Those who have used Trello will already find the way Planner functions are familiar.

The Charts view provides a higher level of overview of the current work, which allows team members to see the status and progress of various projects immediately. This makes it easier to view when anyone can be behind schedule if a specific team member has an impending deadline. The Charts view also shows the tasks assigned to team members, with an overview of their current workload and work performed. In May, support for iOS and Android devices was announced, allowing users to view and update plans on the go as soon as they were created using the web application. Microsoft is also working on adding push notifications for mobile devices.

One of the Planner’s strengths is its integration with other Office 365 tools such as Teams and Project. For example, you can associate a Project Online task with a Planner plan. This will allow the project manager to offload task management to a colleague using Planner. Shared files are stored in SharePoint for easy access, and each board connects to the OneNote laptop for viewing by team members. It is also integrated with Office 365 groups, making conversations available in Outlook. Along with Office 365 integration, another strength of Planner is its ease of use, although it can be an obstacle to deeper team management.

The Move from Planner to New Microsoft Project

Planner is a lightweight, collaborative, and highly visual task management tool positioned to rival the popular Trello (just like Microsoft teams are Slack’s answer). But in a crowded collective field, Planner also matches tools like Asana and Smartsheet that offer an alternative to more sophisticated project management applications.

Microsoft already has full-featured project management and portfolio tool called Project. Planner is a good and simple product for Office 365 users. Problems are associated with more complex workflows, and corporate reporting is still evolving. Planner is somewhere between scraps and lists of applications such as Microsoft To-Do software. Planner and Teams are relatively new compared to more advanced collaboration tools, but Microsoft has “aggressive plans” to compete with growing and more mature products on the market.

Using Planner for hardcore portfolio management is impossible. The users will not want or cannot refuse to detail the project for a relatively simple, more visual everyday workflow. The Planner is better suited for less complex projects requiring a collaborative approach. So, now they’ve gone for a more sophisticated yet not completely hardcore project management. And it is called New Microsoft Project.

New Microsoft Project is also a more flexible tool and, therefore, can cover many use cases. It is available at a subscription, while in the future it might become a part of general Office 365 Subscription, now it is not. Plus Microsoft is an active supplier and has such enormous authority and array of products (like Microsoft Project for Desktop and Microsoft Project Online) that it can afford to combine its products to crowd out potential competitors. As with the tools available in G Suite G, integration makes it easy for many Office 365 subscribers to use while they work based on what the software “talks to each other.” New Microsoft Project has a special tab, that sends you notifications from all over Office 365: Outlook, Teams, Planner, Yammer, etc.

It looks a lot like Planner and has a lot of the same features, like the board view and the ability to track the tasks readiness and the people who’re responsible for the task. However, it is now a part of the Project Online and Project for Desktop family, rather than Office 365, like Planner. Also, there are some distinct differences between the two. For instance, there’s a Timeline view, which is basically an intertwined full timeline for all the projects at play, including those not yet started and those completed. Also, you can finally add dependencies to the tasks. Plus, you can finally submit the time it took you to complete the task, so you see actuals, not just the preliminary estimation timeline, which makes New Microsoft Project somewhere in between a hardcore Project and an Easy-go-lucky Planner. 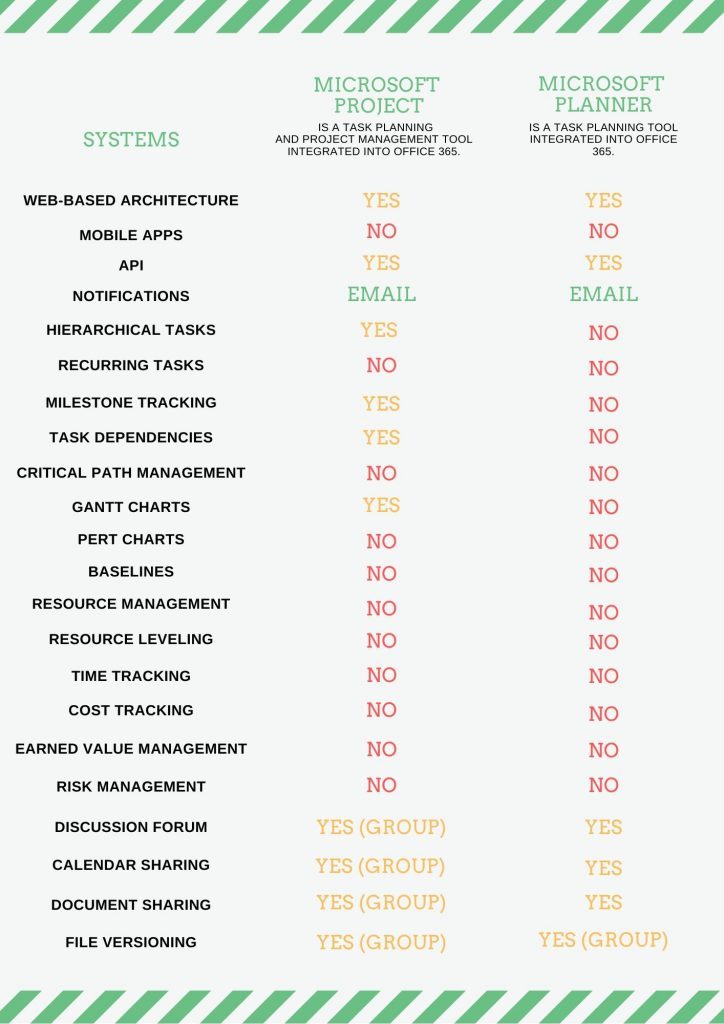 It doesn’t make much sense to compare the fruit of evolutionary change with the tree it sprouted from. The Microsoft Planner has always been and still is a very useful tool for collaboration and work-related communication. A perfectly tight box where all the relevant information on the project is stored and available only to the people who need it. New Microsoft Project is the evolutionary fruit. It is designed to be capable of doing more with the project-related data, for example, to commit time, watch the progress on the tasks, and keep perfect order within the overall project timeline. Plus, Planner has always been a part of the Office 365 family, which is created for non-tech-gurus. And New Microsoft Project is a part of the Microsoft Project for desktop\Project Online family, which is concerned with more complex and intricate matters than simple task planning for the week. Microsoft project management’s new tool is a perfectly balanced system for non-tech-gurus to work with tech-attached tasks and environments.

In case you are interested Microsoft Project Online and Planner Integration, the FluentPro team is ready to support every step of your migration.

to know more about automated integration

By using our site you agree to our use of cookies

We use cookies on our website to give you the most relevant experience by remembering your preferences and repeat visits. By clicking “Accept”, you consent to the use of ALL the cookies. However, you may visit "Settings" to provide a controlled consent.

This website uses cookies to improve your experience while you navigate through the website. Out of these, the cookies that are categorized as necessary are stored on your browser as they are essential for the working of basic functionalities of the website. We also use third-party cookies that help us analyze and understand how you use this website. These cookies will be stored in your browser only with your consent. You also have the option to opt-out of these cookies. But opting out of some of these cookies may affect your browsing experience.
Necessary Always Enabled
Necessary cookies are absolutely essential for the website to function properly. These cookies ensure basic functionalities and security features of the website, anonymously.
Functional
Functional cookies help to perform certain functionalities like sharing the content of the website on social media platforms, collect feedbacks, and other third-party features.
Performance
Performance cookies are used to understand and analyze the key performance indexes of the website which helps in delivering a better user experience for the visitors.
Analytics
Analytical cookies are used to understand how visitors interact with the website. These cookies help provide information on metrics the number of visitors, bounce rate, traffic source, etc.
Advertisement
Advertisement cookies are used to provide visitors with relevant ads and marketing campaigns. These cookies track visitors across websites and collect information to provide customized ads.
Others
Other uncategorized cookies are those that are being analyzed and have not been classified into a category as yet.
SAVE & ACCEPT